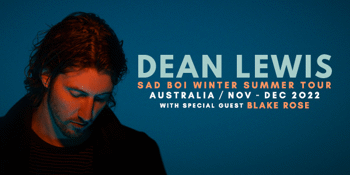 With Blake Rose
Metropolis Fremantle (Fremantle, WA)
Wednesday, 16 November 2022 7:30 pm
94 days away
18 Plus
POP
Indie
Rock
Send this event to
TEG Van Egmond is thrilled to announce that one of Australia’s most accomplished singer/songwriters – the multiple-award-winning, multiple-Platinum-certified global superstar Dean Lewis – will embark on an Australian and New Zealand tour, taking in 18 cities and regional centres, this November and December.

His ‘Sad Boi Winter Summer’ tour has been electrifying audiences throughout North America and Europe in recent months and now it’s finally our turn to experience Dean’s signature sound in the flesh.

Only a handful of artists are fortunate enough to achieve both critical acclaim and commercial success off the back of a debut single release. Dean Lewis is part of this exclusive club thanks to his global smash hit ‘Waves’ (2016), which landed key syncs in some hugely popular American TV series including ‘Suits’, ‘Grey’s Anatomy’, ‘Riverdale’ and the ‘Magnum P.I’ remake. ‘Be Alright’ (2018), Dean’s follow-up single, made an even bigger impact, going Platinum+ in 22 countries and topping the ARIA Singles Chart for five weeks!

Dean has sold 3.6M+ albums and EPs worldwide and his music has attracted 7+ billion streams to date. He was welcomed into the Spotify Billions club when ‘Be Alright’ surpassed 1 billion streams and has over 1.1M YouTube and 1.3M Tik Tok followers. His most recent single ‘Falling Up’ is ARIA Gold-certified with 68M+ global streams. Lewis was an Apple Up Next artist in 2019 and played over 200 shows that year, including sold-out U.S. and Australian tours plus many shows and festival slots around Europe. That same year, Dean collaborated with Dutch superstar DJ/producer Martin Garrix on their hit single ‘Used To Love’ and kicked another bucketlist career goal when he performed at the AFL Grand Final.

Off the back of just one album release – 2019’s chart-topping, multiple-award-winning, multiple-Platinum-certified ‘A Place We Knew’ – Dean has cultivated and captivated a huge global fanbase. After ‘Half A Man’ was performed by a contestant on X Factor in Denmark earlier this year, this track from his debut album received a second life when it flew to the top of the Danish charts.

After Dean performed his latest single ‘Hurtless’ on X Factor Denmark’s finale, this impassioned breakup song climbed to #8 on the Danish charts and also topped the Swedish Heatseeker chart. “‘Hurtless’ has immediately become one of those special, connecting moments in the live shows,” Dean said during an interview. His first single release of 2022, ‘Hurtless’ was preceded by 2021’s ‘Looks Like Me’ and ‘Falling Up’ and continues to receive high rotation on radio stations globally.

Make sure you’re in the audience to help Dean celebrate his endless, ongoing list of global achievements. It doesn’t get much better than watching one of Australia’s finest voices bringing his universally relatable songs, which regularly flood our playlists, to life.

Supporting Dean Lewis on his Australian tour is Blake Rose, who Dean personally selected after hearing his music on Spotify.